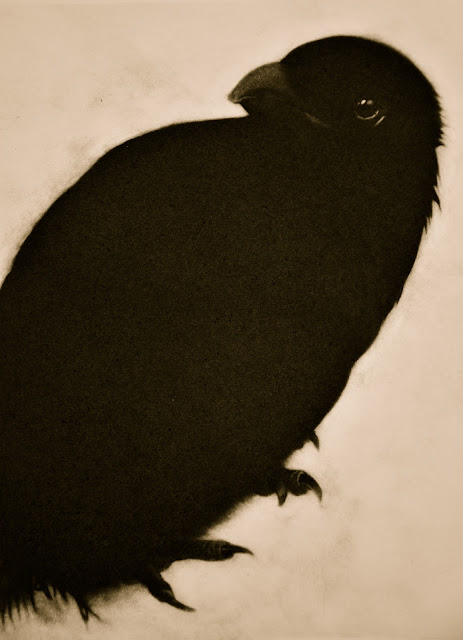 This story begins a long time ago, when I was a little girl in what felt like a simpler time.

Out on my bicycle one summer’s afternoon, I found a wounded crow in the lane. Carrying it carefully home, my nan explained to me that farmers will deliberately maim a single crow –  knowing that the remaining members of the flock, (or “murder”,) will come to its aid, whereupon they can be shot – en masse.

I remember my childish heart aching at this deceit and cruelty, and loving my new friend from that moment on.  ‘Joe’, as he was dubbed, lived in our garden for a year or more. He never flew again but hopped around after me  and listened attentively, (or so I imagined,) to my childish ramblings while I dug him worms.

So a few months ago, trudging out of Morrisons of all places, (the usual adult boredom and resentment of supermarket shopping weighing even more than my groceries,) I was stopped in my tracks when there in front of me in the sunny car park, stood a man – with a wounded crow on his shoulder.   Dumping my bags in the car, and with no idea what I was going to say or do, I picked up camera and sketchbook, and wheeled back to where they stood.  It turns out this good-looking young man – Gabriel – was homeless and friendly.  He had rescued the crow who was now completely bonded to him, roosting day and night on his shoulder.  The crow would not leave him and would brook no contact from others, as I found out when, extending an appreciative hand, I received a firm but clear warning peck!

Gabriel readily agreed to pose for photographs and sketches for a tenner and we passed a happy half hour in Morrisons car park,  talking life and crows in the sunshine.

This then, two months later, is my last print of the year – a mezzotint engraving of Gabriel’s crow. 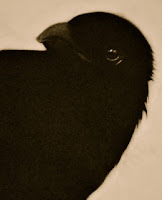 « Settling the mind
On drawing. »