Home > Blog > on drawing and non-violence

One morning last week a friend called to say he had found a stoat in the lane.  He said it must have been hit by a car but was unmarked and would I like it to draw? Waiting for him to turn up with the creature, I noticed that I  knew nothing about stoats and had no feeling for them either way.  No attachment, no aversion.  Completely neutral.  I couldn’t even recall their occurrence in any book or poem.  Curious.
The stoat was indeed perfect.  A beautiful chestnut brown, black tip to the tail and a surprisingly white belly.  My friend suggested that, as the rigour-mortis subsided, I could change its posture but I am never inclined to poke around with dead creatures, feeling rather strongly that even the tiniest and most humble of them deserve some measure of respect in death. So I lay her down, as she was, in the studio and started to draw. 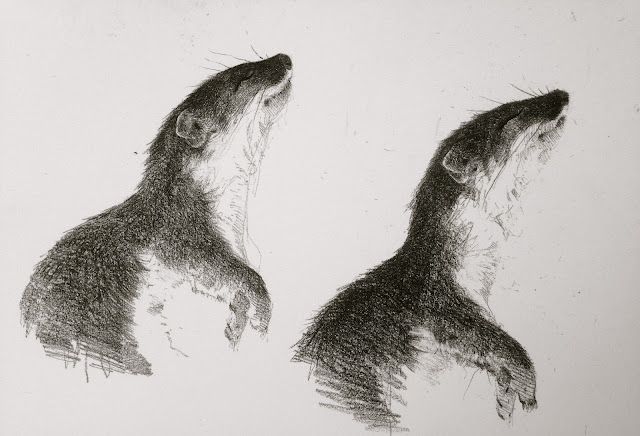 By the end of a hot July day the stoat was, predictably enough, attracting large bluebottle flies and starting to smell.  Something less predictable  however, happened to me. As I gazed and drew and the hours passed, I became completely beguiled by her, entranced, unwilling to stop.  Sure, the self-conscious, discursive mind chattered and tutted – it was anthropomorphising to read anything beneficent into that tiny smile.  Could there really be such peace in death?   But the feeling was unmistakeable.  Deep love.

After six hours of drawing, reluctantly but with gratitude I buried her carefully in the compost heap and wondered the following:  If we spent more time looking at things – and by more time I really mean sitting for hours, and by looking I really mean gazing –  and less time channel-hopping our way through life, would we be less violent, unhappy beings? Buddhist monks in India traditionally spend weeks sitting in the charnel grounds, contemplating the dead.  Can we continue to fear, or hate, or even feel indifferent to something when we’ve looked at it properly?

This, of course, is the great privilege of drawing.  As John Berger has said, a drawing of a tree is not a tree, nor is it me, nor even an expression of me.  It is a drawing of a tree being looked at.  It contains the experience of looking.  I would go further and say that a good drawing, honestly done, inevitably contains the experience of love and gratitude, not only for the the object but for life itself. 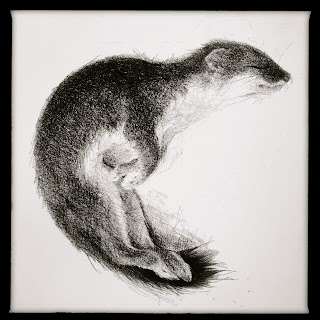