This is to be the year I learn la manière noire – the dark method. 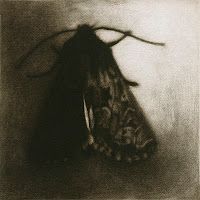 There is something rather magical about mezzotints.  I’ve noticed when printing them in the workshop that it is never long before some curious soul is drawn to look over my shoulder  and enquire, “what on earth is that?“  They are simply unlike anything else.

Mezzotint –  from the Italian mezzo  (half) and tinta (tone).  A method of intaglio printing thought to have been invented in Germany in the mid 1600s.  The technique was so widely adopted in England as to be soon also known as la manière anglaise.  As such we’ll leave it to Hogarth to explain;

“The copper-plate it is done upon, when the artist first takes it into hand, is wrought all over with an edg’d tool, so as to make it print one even black, like night: and his whole work after this, is merely introducing the lights into it; which he does by scraping off the rough grain according to his design, artfully smoothing it most where light is most required…”

William Hogarth, The Analysis of Beauty (1753)

I like the way he says; ‘merely introducing the lights into it…”  This is a technique only for the seriously obsessive.  You need to think not only in mirror image, (as with all printing,) but this time also from dark to light. This is all about slow.  Before one can even begin, ‘wrought all over with an edged tool,’ means the plate is rocked with a special toothed rocker, (see left below,) in 64 different directions.  If this rocking isn’t perfect and even, flaws will reveal themselves in the later scraping and burnishing to achieve the smoother, (whiter,) areas. 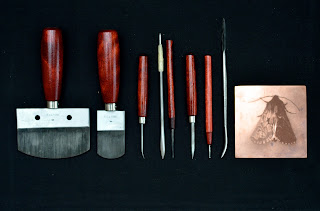 Initially, it is the velvet black of mezzotint that is so seductive  but as I go on with the technique, I begin to appreciate that it is the soft, gauzy greys and whites achievable with careful burnishing that are really the special preserve of this method.  Aside from the cost of copper, tools, ink and paper, each plate is a huge investment in terms of time.  The plate below took three weeks to make, (excluding rocking,) and it takes over an hour to ink, wipe and print each one.  However, something transformative and even magical is achieved in the madness of going so slowly in a crazy, speeded-up world. 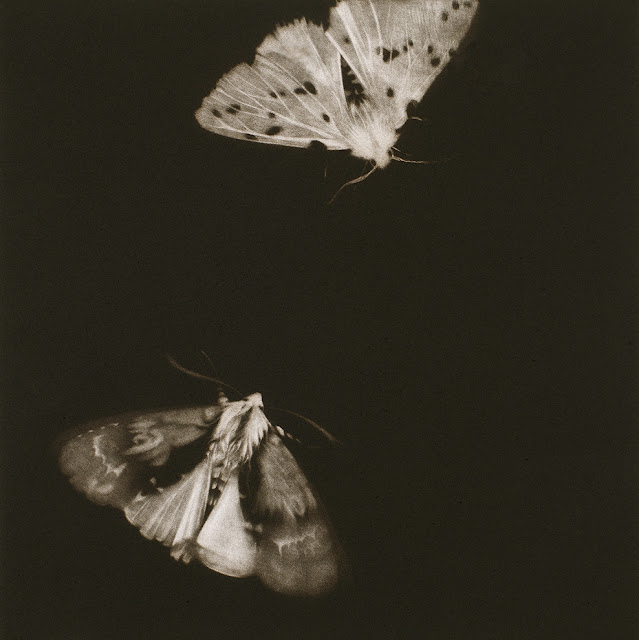 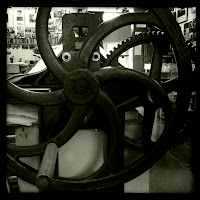 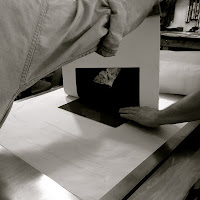 « Georgio Morandi
on drawing and non-violence »