In 2010 I took a break from my usual painting practise to make a series of very small still-lives.  My yoga teacher had been talking about the nature of ‘practise’ – not getting too attached to good and bad, just practising, modestly and consistently and every day.  Non-attachment was an idea I was familiar with but I guess hadn’t really heard in a way that applied to my life until that moment.  So I started getting up every morning and just painting the first thing that appealed to me that day.  The rules were simple; a very limited palette, a tiny scale, just one day to work on them, no fiddling, no fudging it and a mantra of ‘what can I actually see?’ 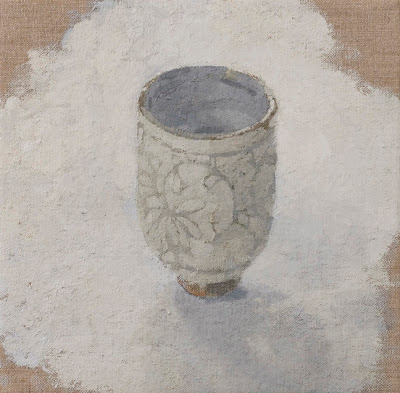 Japanese Tea Cup 6″ X 6″ Oil on Linen
©Sarah Gillespie 2010
On first showing these tiny canvases to a few friends, more than one of them commented that they were ‘like Morandi’.  This is nothing new.  People often mention another artist when looking at work and I’ve come to realise that this referencing is one way people find to gain some purchase on what’s in front of them.  What was new,  rather embarrassingly, was this name Morandi.  Not many weeks later I was walking up Castle street in Totnes and spotted a large monograph of his work right in the window of the second-hand bookshop.  Too much of a coincidence.  I bought it without even asking the price.
Morandi’s work is stillness itself.  A patient, life-time’s  endeavour.  My own efforts came nowhere near.
A few weeks ago, in that same strange way that things seem to come to one sometimes,  I was bought first a catalogue and then a postcard from an exhibition, currently at the Estorick Collection in London, of Morandi’s etchings.  Estorick? Etchings? I had no idea.  Morandi calling again.
The little exhibition turned out to be quite, quite wonderful.  For a start the museum is tiny.  Simple white rooms filled with Morandi’s patient, singular vision.  To walk slowly from etching to etching, accompanied only by a few other entranced souls, is to enter this modest but determined man’s world.  Everyday objects and corners of landscapes somehow made sublime by dint of his eye and hand.  The experience was one of absorption and delight.
Then, rounding a corner in one of the rooms was this:
“Today, the confusion which oppresses the arts is enormous; and the poor quality of painting that floods the continents with greasy,  oily colour is difficult to define. There is an abundance of foolishness, much lack of understanding, a great deal of banality and cheap sensuality – and as for spirit, one would search for it in vain.”
From Georgio de Chirico’s essay on Morandi written in 1922 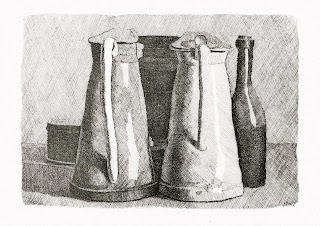