Home > News > I will not be going to Mezzofest in Russia 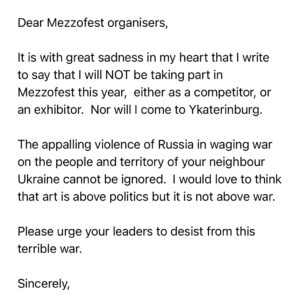 In 2019 I was hugely honoured to win one of the three prizes at Mezzofest V in Ykaterinburg.  It is with great sadness in my heart that I have written to the organisers to say that I will NOT be taking part in Mezzofest this year,  neither as a competitor, nor as an exhibitor.  Nor will I come to Ykaterinburg.
I cannot imagine taking part in an event sponsored by the Russian government at this time.
Mezzofest is the preeminent international gathering of mezzotint artists.  The competition and exhibition along with a week of celebration and workshops is held at the Museum of Fine Arts in Ykaterinburg, every two years. As a previous prizewinner I would have had a solo showing in the Museum of Fine Art and was looking forward to taking part in the festival and meeting other printmakers from around the world.
However, the appalling violence of Russia in waging war on the people and territory of their neighbour Ukraine, cannot be ignored.  I would love to think that art is above politics but it is not above war.
Withdrawing from Mezzofest is a very small thing but it is the only expression I have of my disgust and dismay at this war. It is my sincere hope that other artists will join me in this protest.