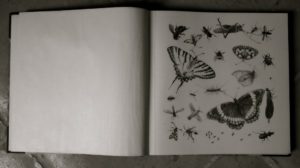 I didn’t mean to do this drawing and I can’t bring it home with me.  It’s in the ‘visitors’ book at the studio here in France.  When I started it, I thought to just draw one or two interesting insects on the page and write a thank you message to the owners.  But…while here, I have read Dave Goulson’s fascinating book, “A Buzz in the Meadow”.  Prof. Goulson is an entomologist and Professor of Biological Sciences at Sussex University.  His book is funny, modest, fascinating, sexy (yes,) and very readable.  It also packs a powerful punch in the last few chapters on the science of conservation, pesticides (Neonicotinoids in particular,) and our shocking record with the more-than-human-world.   I can’t recommend it highly enough if you are at all interested in the natural world.

Anyway, reading this book had the effect of sharpening my attention to the miniature world around me and the drawing grew and grew.  It maybe just the heat, and it may be that, with so much more space, agriculture is much less intensively practised in this part of France but the effect is that there are hundreds, probably thousands, more insects.  As I searched in the one or two text books I’d bought with me, or more frequently googled those I didn’t know, their world – and my interest – expanded. It was also depressing to find so many articles on line about how to ‘get rid’ of insects.  Most of us, it would seem, simply cannot live peaceably alongside other creatures, let alone appreciate that if they go….they are taking us with them!

Here is my drawing then.  A very, very incomplete and not-at-all-to-scale selection of some of the life that crawled over, or fluttered past me whilst out drawing here in the beautiful Tarn et Garonne. 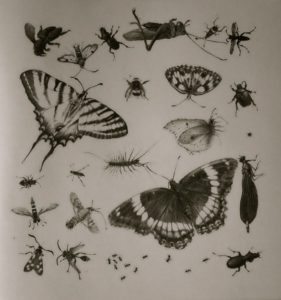 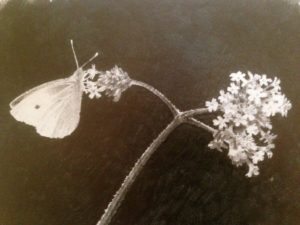 “The damage we have already done is considerable.  The Earth’s climate will continue to warm for decades, regardless of whatever action we take now, leading inevitably to famine and hardship.  Countless species are already extinct, or exist only in relict populations that are doomed to extinction.  But that is no argument not to act – and act now.  At a global level, conservation efforts so far have been a dismal failure.  We need to up our game.  The sooner we stop ravaging the Earth, the less awful our future will be.
This book is intended to inspire, to encourage everyone to cherish what we have, and to illustrate what wonders we stand to lose if we do not change our ways.  Biodiversity matters, in all shapes and forms.  Conservation is not just about Javan rhinos and snow leopards; it is as much about bees and beetles, flowers and flies, bats and bugs….Go outside, look and listen.”
Dave Goulson 2014
“A Buzz in the Meadow” by Dave Goulson is published by Jonathan Cape.

« On not knowing what to do
Printmaking »