Home > Uncategorized > About a Beech Tree 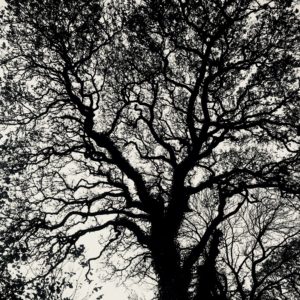 Returning home from a walk on the coast a few weeks back – limbs stretched, brain empty, relaxed, the day pleasantly nothing special, the way utterly familiar – I turned off the ‘main’ ridge road at the five-ways, to dive down the narrow tunnel of lane that leads the last two miles into the village.

As the car slowed, before me rose against the western sky the black lace perfection of a beech tree. Now, I’ve walked and driven past this huge old tree more times than I can number but for some reason this day its presence was particularly magnificent.

Pulling the car into a gateway and cutting the engine, I left Daisy, wet and contented in the boot, crossed the lane, leant on the opposite gate and lifted my eyes to the vision. The sky was late afternoon lucid. The tree bare against the light, so glorious it seemed audible -it might have been Beethoven – serious, dark, brilliant, intricate and vast. With my boots on the ground, and sharp rust of metal gate beneath my forearms, a robin, chest out, sang like water, extending the finest branch-tips out beyond their physical form. My eyes drank and minutes passed.

It seemed to me then as if the tree was engraved and printed in black ink on the paper of western sky, the crown of the whole perfectly domed. The robin sang on out into cold afternoon air; crows lifted and small groups of starlings merged, heading south to their reed-roosts behind the Ley.

Eventually, feeling the glare of eyes on my back, I turned to see a man I knew by sight but not by name, in overalls, hands on hips, standing in the open doors of a workshop the other side of the ‘main’ road. Watching. The beech tree stands in one of those odd triangles of land you still find around and about that are between fields, sheltered by high hedges and cultivated in the old-fashioned way as an allotment.: Gooseberry bushes, compost heap, leeks and brassicas standing in the neatly tilled beds. A few old tyres. I wasn’t on his land, but I was clearly too close.

Maybe ecstasy made me brave. Nothing for it . I strode back across the road towards him, broad smile, hand outstretched in greeting: ” hello, I’m Sarah, I live in the village. That tree, your beech, its just magnificent isn’t it?” The hand that met mine was very big and rough but warm. Relief washed with prickles of fear went through me as a smile of sorts creased his face and for a brief moment we stood as one; our four eyes taking in his beech and the evening sky.

“Oh yes” he said. “Not sure how much longer that’un ‘ll last”

I burbled some nonsense about not many really big trees round her, too close to the sea etc., at which he pointed out all the various large trees within sight, whose land they were on, as well as the places where some had fallen, and in which years. I burbled back, he warmed up – I knew just enough of trees, of birds, the territory to be just about acceptable. Eventually he asked;

(Wilf lives on a hidden farm off the ridge road I had just driven along, with his sister and a selection of very scary sheep dogs. He makes cider, she makes butter and the farm, as far as I can tell, hasn’t changed in any way since WWll. )

“Wilf says he can remember that beech being that big when he used to walk into school as a lad.”

This last exchange opened up a world in my head like a door. I could see Wilf daily walking the four miles from his home to the primary school in the village, short-trousered, stout-booted, the wrens and rabbits in the hedgerows his familiars, he would have been entirely un-plagued by the gleaming 4X4s that land their children at the school gates these days, before growling off through the lanes at speed, bearing their expensive looking captains to pilates or spin. I imagined him glancing up at that tree as the seasons changed and he froze or sweated up and down the hill. A marker – roughly half way.

I imagined also the tree sailing on in its triangle of land as families evacuated their homes around it, making way for the billeting of the American and Canadian soldiers who marched back and forth to the beach for their ill-fated rehearsals in 1944.

I imagined the 60s and 70s of my own childhood. The cold war, myxomatosis, quiet hedgerows, smaller tractors, more flowers, definitely a lot more insects – it is thought that we have lost about 70% of insect mass to modern agriculture in the years since the war.

(I recently followed a tractor and sprayer so vast that it tore at the deep lane banks, chipping off whole saplings, ripping out great chunks of grass and primroses, tossing them onto the tarmac in its wake. These machines work all night with their lights and reversing bleeps offending the stillness, banishing life. It’s hard not to feel anger at the brutality and scale of farming. All is not at all well in the countryside. )

Does the tree notice? Perhaps the tree is more aware of generations of blackbirds, returning chif chafs, redwings in colder years and the nightly arcs of bats? Does it miss the badgers, now culled or poisoned, that lived in its roots? Perhaps its congress is with the Ghost moths, the Mottled Umber, Pale November, Large Emerald and Feathered Thorn moths. Maybe it concerns itself more with the moisture in a sea brack that hangs around through the morning. Perhaps its most stimulating conversation is with its neighbour? A music of tiny electrical pulses passing in the darkness along fine, fibrous roots, beneath the tarmac and under the hedge. Reassurances passed in the peace of darkness. Perhaps its memory is an imprint of weather, a history in gales, of other beeches hundreds of yards away that over night stopped answering the musical telegraph in the ground.

Who knows? I shook hands again with Pete (now I know his name and we nod greetings,) and continued home.

All this year, my dog old and lame, my walks shortened, I have been paying more attention, ‘giving heed’ to the trees close to where I live. Not necessarily to record, or ‘observe’ them but in some effort to be here with them, to borrow something of their stillness, their slower beat, their fine music of wonder. The reward for my payment of attention has been beyond measure and, I think, has changed my work significantly.

Historically, much of European landscape painting has addressed itself to a visitor from the city, the tourist. The ‘landscape tradition’ started as mere background to figures long before reaching the status of its own genre. View and vista, scenery and aspect, romanticised, objectified, prettified, idealised – separate. Tree as specimen, picaresque ruin, or allegory.

So instead I am trying, this year, to draw and paint trees ‘as if’. As if its presence meets my absence. As if the presence of the sky comes only from the pregnant absence between the branches. As if the water and carbon that makes us both could speak of shade and sunlight, starlight and frost and most of all, as if the black trunk and heavy limbs rise – as of course they do – from the compost of the land; leaf mold, wing dust, robins’ bones and my own.

All that I serve will die, all my delights,

The flesh kindled from my flesh, garden and field,

The silent lilies standing in the woods,

the woods, the hill, the whole earth, all

will burn in man’s evil, or dwindle

in its own age. Let the world bring on me

the sleep of darkness without stars, so I may know

my little light taken from me into the seed

of the beginning and the end, so I may bow

to mystery, and take my stand upon the earth

like a tree in a field, passing without haste

or regret toward what will be, my life

a patient, willing descent into the grass.

Wendell Berry – the wish to be generous. 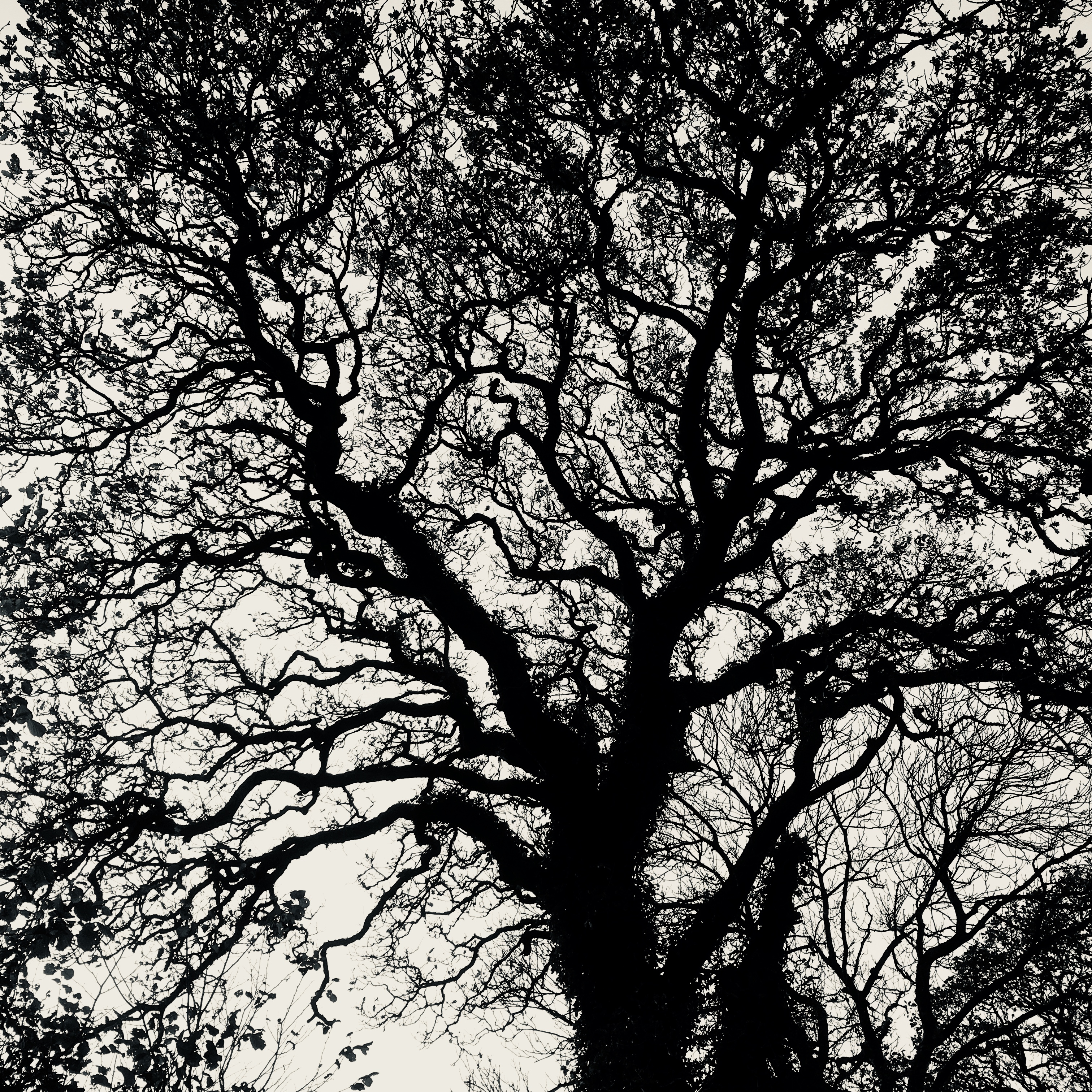 7 comments on “About a Beech Tree”