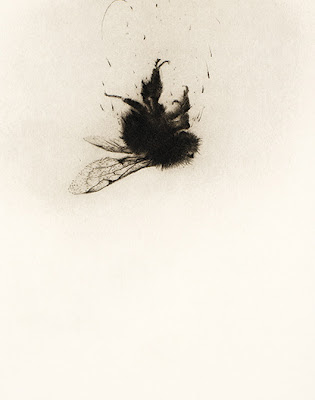 First bees are humming in the garden this week –  but news today of research from Stirling university into the devastating effect of one particular group of commonly used pesticides on the queens in particular, makes each one feel especially precious as it bumbles around in the delicate pink froth of the short-lived cherry blossom.

Bizarrely I learned from a program last night that it is often gardens in the city centres where bees are safest and thriving – far enough away from the toxic acres of industrial agri-business.

“The pesticides investigated in the new studies – insect neurotoxins called neonicotinoids – are applied to seeds and flow through the plants’ whole system. The environmental advantage of this is it reduces pesticide spraying but chemicals end up in the nectar and pollen on which bees feed. Goulson’s group studied an extremely widely used type calledimidacloprid, primarily manufactured by Bayer CropScience, and registered for use on over 140 crops in 120 countries.

Bumblebees were fed the toxin at the same level found in treated rape plants and found that these colonies were about 10% smaller than those not exposed to the insecticide. Most strikingly, the exposed colonies lost almost all of their ability to produce queens, which are the only bee to survive the winter and establish new colonies. “There was a staggering magnitude of effect,” said Goulson. “This is likely to have a substantial population-level impact.” “

The full article, (link below,) is interesting but depressing in that the UK government appears to be once again to be behind the curve: “Pesticide manufacturers and the UK government deny a class of the chemicals called neonicotinoids cause significant problems for bees, but Germany, Italy and France have suspended key insecticides over such fears.”


Gaurdian article on new research into bees and pesticides

« Hosomi Timelapse drawing
When we step outside… »