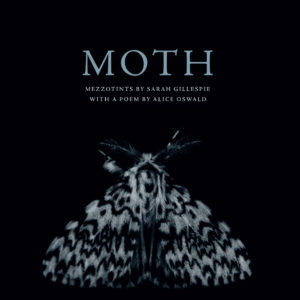 About a year ago, the eminent poet Alice Oswald sent me a poem about a moth. I invited her and her husband Peter for tea in my studio and, in return for her extraordinary poem, gave them a mezzotint of a Poplar Hawk-moth. That might have been that… except that the conversation and the dark beauty of her poem worked their way under my skin and would not leave.

I’ve been drawing moths for many years but, the idea perhaps crystallised by the gift of the poem,  I spent 2019 making some twenty mezzotint engravings of British moths – all of them common, but all of them in decline. We have around 2500 species of these exquisitely-patterned wild creatures in the British Isles. They inhabit our nights, they play a crucial role in ecosystems as pollinators, recyclers and food for birds and bats, yet they are so often overlooked, misunderstood and unloved. It’s estimated that we have lost around a third of our moths since the First World War. Some, like the Garden Tiger, whose caterpillar is the main food of the much-missed cuckoo, have declined by up to 80% or more since the 1970s. About 50 species have gone extinct altogether.

The link between Alice Oswald and me in human terms is the book designer Kevin Mount. Kevin encouraged me to put all the mezzotints, together with Alice’s poem, into an artist’s book. We added a conversation I had with the Buddhist writer Gay Watson about my choice of mezzotint as a medium and the value of paying attention. Kevin Mount’s contribution reaches well beyond book design; his aesthetic, care and attention to detail are, to my mind, beyond compare and I hope that together we have made something worthwhile. Moth is not a catalogue, nor a monograph, nor is it a natural history book. I hope that it is instead a quiet entreaty to wake up from our sleep and to pay close attention to our world – unlearning what biodiversity expert Matthew Gandy calls the ‘sensory elimination’ that characterises everyday life.

I had three exhibitions of the 20 Moth mezzotints lined up to coincide with the book.  The one at Groundwork in Norfolk – Britain’s leading gallery for art and the environment – opened and closed a few days later.  The second, at Greenhill Arts here in Devon has been cancelled.  Strangely, I’ve felt quite calm.  Everyone has had their lives disrupted in some way or other and exhibitions seem minor in the grand scheme of things. The important thing is that we have time to reflect.  Moths are quite used to being in the dark, unseen, they will wait.  Mezzotint has been around since 1670 – similarly overlooked – it too will wait.

The Moth book was published in early March, almost the exact week that Covid19 hit the UK …and yet it has been a godsend.  It seems that people – stuck indoors, feeling frightened and uncertain have time at last to consider our place in the natural world and what impact we might have been having with our relentless light and busyness.  I’ve been busy sending them out all over the world and yes, even in the midst of lockdowns they have reached people in Spain, Antwerp, Australia, New York and even a tiny island off Vancouver island!

A 60-page artist’s book, published by The Letter Press in a limited edition of 300, with each copy numbered and signed by the artist. Moth contains extraordinary reproductions of all the moth mezzotints, and a new poem from Alice Oswald.

Designed and typeset in Jenson by Kevin Mount and printed on Symbol Tatami 170 gsm paper, with a wrap-around jacket.

If you would like to purchase a copy of Moth at the price of £45, please email me directly at studio@sarahgillespie.co.uk