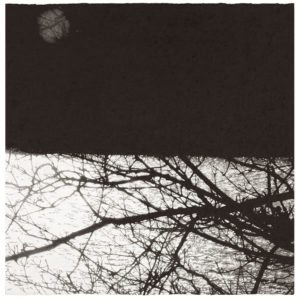 Sarah Gillespie’s pencil hovers above the empty white paper. Looking out over the Devon landscape, her forensic gaze takes in a scene she is intimately familiar with. Each twist and turn, rut and stile of the paths around Slapton Ley have been engraved into her muscle memory through repeated walking; each branch and leaf, sunburst and change in light and tide, captured and held in her mind’s eye through continued observation. She waits, pencil poised, for the ordinary to become extraordinary. Then with a few lightly traced lines she starts to draw, turning each moment of her intense observation into a physical mark.

For twenty years these quick sketches have helped Gillespie keep a visual record of this small corner of the South Hams, capturing its overlooked spaces and hidden inhabitants. But as she works them up into paintings and prints in her studio, these visual observations mingle with memory and reflection: winter trees become skeletal presences, pinpricks of light seem to dance like fireflies on mud and water, autumn leaves, shimmering in the breeze, become angelic messengers caught in a tangle of branches.

For many years Gillespie represented the physicality of this world and evoked the materiality of what she was walking across using tiny strokes of oil paint. These covered the picture surface and became a geology of her gaze.  Look too hard and for too long into light, and you can be left blinded. Gillespie has been gazing at the incidental, overlooked aspects of the world for so long that she has found herself absorbed into the landscape and drowning in the light she so lovingly recreates.  She has become dazzled, seeing light and dark rather than colour and form. No longer drawn to the physicality of things, she senses the presence of the void; the solid world falling away like shingle into the sea.

This border between dark and light, nothingness and being, is one that Paul Nash explored in a series of 12 woodcuts to illustrate the Book of Genesis in 1924. Nash’s work begins with the unformed void, a square of intense black ink. Out of this deep darkness light emerges; a series of thin white lines introducing the forms and solidity of a world coming into being. In contrast, Gillespie’s loving evocation of the Devon landscape and its ecology always appeared to start with the solid world, the void obscured by light and material things.

But things have changed in recent years. Gillespie’s vision has been bedazzled forcing her to occupy the tidal zone between the solid and immaterial.  Even though the heavy 600gsm hotpress watercolour paper she now uses provides a smooth and stable white clearing for her worlds to emerge into, her use of compressed charcoal, graphite and watercolour brings a more fluid and fugitive quality to the work.  The paper is no longer covered with matter, but areas are left empty as if the charcoal has just blown away, or hasn’t yet arrived. ,

Unlike oil paint, with its cloying, viscous qualities, these tiny, black and silvery grey deposits of compressed charcoal are more fragile and ephemeral. They lie lightly, an atomic cloud of carbon that whilst appearing to hover above the white paper also seems to pierce it, disrupting its solidity and creating visual cracks in its surface that lead us back into the void instead of out into the world. Gillespie has become fascinated by this crepuscular tidal zone between the material and immaterial, night and day, an unstable littoral zone where every step could plunge us over the edge. In drawings such as Deep Lane, Swan and Tidal Reaches we find ourselves in this mysterious world of shadows and half light, punctuated by moments of intense black and white, where things are glimpsed rather than seen, and edges are blurred rather than fixed. It is a shadowland, which demands a slower, more concentrated attention from the viewer.

Gillespie begins each drawing by mapping out the composition. This allows her to establish the contours between light and dark and, more importantly, to identify the areas of paper that need to be left white and bare. She starts the process with the hardest grade of charcoal pencils, kept constantly sharpened, weaving a dense yet pale forest of hatched lines. Then she turns to a more lyrical, probing mark, building up a cloud of dancing lines that gyrate across the paper surface, allowing her to create softer edges and more hesitant forms: from the dazzled, interconnected blur that allows the mottled wings of the Puss Moths to blend gently into the black night, to the gentle haze that dissolves the body of the Fallen Bee into the surrounding light.

As Gillespie moves through the different densities and softness of pencils, from a silvery ‘H’ to the velvety richness of a ‘3B’, whilst alternating between these two types of mark, layers of carbon accumulate on the paper in a translucent, almost painterly glaze, that traps light and builds depth. Applying only light pressure to the pencil as she holds it, Gillespie relies on the mechanical movement of her wrist and fingers to do the work. Consequently, as the pencil skims lightly across the smooth paper, she falls into a meditative trance in which the ego is lost. Focussing on nothing more than these black marks and their relationship to the white paper, she waits for forms to emerge, looking into the emptiness for signs of life, listening for the beating of moth wings in the darkness and watching for the white feathers of a swan to emerge from the night.

John Berger wrote that ‘To draw is to know by hand, to have the proof that Thomas demanded.’ When Thomas placed his fingers into Christ’s wounds, he was not only looking for proof of life, he was looking for the new life of resurrection, the combination of the material and immaterial that holds the divine and human in creative tension. Gillespie’s pencil, dancing in lyrical repetition across the paper is also probing, constantly alert and inquisitive, looking for the void beneath the solid, allowing the immaterial to slip into the material, and glimpses of the sublime to be found within the everyday.

Gillespie’s new drawings take us to the liminal boundaries of dawn and dusk, asking us to become crepuscular beings sensitive to the coming of light. She asks us to wander through a world that is no longer solid, but transformed into a tidal zone of flux and flow; where borders are blurred and indeterminate, swans dissolve into ripples of darkness, blackbirds become blackholes in the fabric of space, and dry land has not yet emerged from the sea.