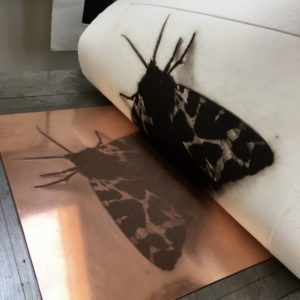 “Why moths?” is a question Devon mezzotint printmaker Sarah Gillespie is used to answering – being sympathetic to the animals and their status. “They’re misunderstood, overlooked and deeply

unloved by most humans,” she says. “I wasn’t looking for moths when I started drawing them around ten years ago – they came and found me. Their numbers may be in appalling decline but for me their presence has become ever more insistent. I see in their short lives a glory that comes from participation in the whole complex, entangled fabric of life. Their fragile, winged emanations speaking to us urgently of the dark, of the earth, of all we cannot see,” she adds.

Sarah’s works, studies based on drawings of moths, insects and occasionally landscapes, have a ghostly quality, speak a little of the night, and are hugely effective at capturing something about their subjects’ struggles. Mezzotint, it seems, is perfect for achieving this. “I did my first mezzotint at art school 35 years ago. I was at the Ruskin School of Drawing and Fine Art in Oxford and the print room was closed for health and safety,” Sarah recalls. “Those of us that wished to print were very kindly accommodated by the Oxford Printmakers Co-operative, a great lesson in workshop discipline. I focused on painting for years, only returning to print about ten years ago, and by then non-toxic printmaking had become a thing. I couldn’t get on with acrylic, so I gravitated towards dry point and quite naturally back to mezzotint. It’s a very direct medium – basically drawing, just backwards and in mirror. Otherwise known as la manière noire, it’s an intaglio print method perfected in the mid 17th Century, a form of tonal engraving in which the artist works from dark to light, pulling the forms out of a uniquely velvety black.”

The wondrous velvety black Sarah can achieve sets the perfect mood for her animalistic studies. “No other print method gives up quite

“I wasn’t looking for moths when I started drawing them around ten years ago – they came and found me. Their numbers may be in appalling decline but for me their presence has become ever more insistent.”

such magical softness in the highlights, nor such an utter inky darkness,” she says. “I haven’t done as many landscape mezzotints as I’ve been slightly obsessed with the moths. They’re in such serious decline – insects are becoming extinct eight times faster than mammals – and it feels there is an urgency to witnessing their fragility and unseen beauty.

“The gradual drawing forth of the moth from the darkness seems a perfect matching of method to subject. It holds meaning for me somewhere around its ability to speak both literally and poetically of the moths being neither present nor absent, always both. Here and not here. Also, because one is working in mirror and from dark to light and without line, there are, in the long hours of making, many when it is not clear whether the artist is indeed ‘drawing forth’ or whether the moth – the subject – is revealing herself. There is much more of a play, a conversation between these two possibilities than in some other mediums and I value that more than I can say.”

There is indeed a palpable magic in Sarah’s prints, as if these endangered subjects could flutter away, possibly forever. Again, it’s the medium of mezzotint she feels brings this feeling to the fore. “The copper plate is first prepared so it will print an even, deep black. This is done by pitting its surface systematically with a serrated chisel-like tool, known as a rocker,” she explains. “The plate is rocked in 64 different directions to create a more or less uniform mesh of grooves and raised burrs that hold the ink. The design emerges by gradually smoothing the burr with scrapers and burnishers so different areas of the plate hold different quantities of ink and therefore print softly graded tones of black, through grey to white.

“A scraper is used to remove large areas of burr, and a burnisher for more delicate work. Highlights are achieved by burnishing the plate quite smooth so that when it is wiped no ink remains on these areas.”

However, there’s a great amount of preliminary work to Sarah’s prints too. “Much of my process goes on before I even touch the plate. I draw and draw and draw. I take photographs – hundreds of them. Then images distil in the back of my mind for months and sometimes years. Many drop away, but a few insist on being made. Mezzotint is so slow and exacting, with very little room for error, that one has to be really sure. Hundreds of hours go into engraving the plate, and the biggest danger is of losing heart, so one has to be really committed to an image, really want it to happen.”

At the end of the process, Sarah editions herself, alongside her partner Paul (as Dog & Wolf Press), a keen historian of print himself. “We work well together, and rarely argue in the print room!” she says. The pair also have plans for a book of the moths, to include poetry from Alice Oswald and an extensive interview on her process with the Buddhist writer Gay Watson.

After this, plans are afoot to let the moths fly even further afield, with a show that came as a prize in an international competition – a show at the Museum of Fine Art in Yekaterinburg, Russia in 2021. “I think I’ll need 20 or 30 mezzotints for that, so I’m going to be busy…”