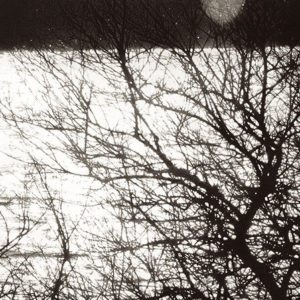 What lies at the heart of Sarah Gillespie’s practice as an artist is a deep concern for the natural environment. She has an enduring love affair with the rural world that surrounds her. Trained as a painter in Paris and the Ruskin in Oxford she has nevertheless been working in black and white, predominately charcoal, for the last seven years.  Occasional tiny touches of colour appear, a drop of watercolor, a stroke of brown charcoal but neither impinge on the velvety blackness of her darkest tones and serve only to complement her subtle half tones.

She suspends time, spending hours outside in known familiar places, watching and waiting, observing, filling small sketchbooks with exquisite drawings of a tree, a stretch of water.  She draws, not to make a representation of something, but to learn its every part, every leaf and twig, to know that thing she is looking at.  It is a nuanced knowing, not casual, but the slow getting to know over time, equivalent to the development of a deeply satisfying friendship.  Her little studies of her immediate surroundings become the raw materials which inform her work. Like a novelist’s notes of conversations overheard on a bus, they feed into her work in fact they feed her work.

Poetry too feeds Sarah’s work. She gains solace from the spare soothing words of Chinese poets, the English poet Edward Thomas who wrote so poignantly about war and the English countryside and W.B. Yeats.  One of her recent works, Zeus, is a retrospective nod to Yeats’ Poem Leda and the Swan.  She didn’t go looking for swans to draw – in fact swans were something she would probably have thought best left alone as a motif, but they found her.  They first entered her sightlines at Stackpole, a beautiful National Trust site in Pembrokeshire and when she returned to her home ground of the Slapton Ley they were there too, inescapable, refusing to go away.

But swans, like her poignant drawings of moths and bees, are not only what her work is about.  These creatures are there, like the trees, like the landscapes, as a vehicle for the investigation of surface and process and a search for answers to the question of what it is to be a human being in this world and the responsibilities that go with it.  She needs that quiet space in her life, one that is filled with the overlooked important things.

Gillespie works very slowly, each mark builds on the next and it takes hours.  It is a contemplative experience in which she loses her sense of self and becomes the tool by which her experience of what she has seen transmutes itself through lines, marks and tone, into an image on paper.  Her areas of light are significant because left untouched. They are innocent of a single smudge of charcoal.  She finds this contradiction fascinating.  “Absence is generative. Things are either falling into it or emerging out of it”. Where there is an absence of anything, where the paper is left blank, what the viewer sees is light, falling on water, filtering though trees and despite the absence of pigment or mark, these parts have the most insistent presence in these works.

In the Autumn of 2015 she stood transfixed in front of Rogier Van der Weyden’s almost three-dimensional silverpoint Portrait of an Unknown Woman, in the superb British Museum exhibition Drawing in Silver and Gold. Like many other artists emerging from that show she went straight down the road to the artists’ suppliers Cornelissens  and bought everything she needed to experiment with that ancient technique.  This led to her recent work, The Creek in the Rain, executed in silverpoint, apart from a few touches of graphite. It has an ethereal delicacy, which capitalizes on the intimacy that she achieves in all her work. The muted tones, characteristic of silverpoint, create an immense sense of space.

Gillespie’s drawings are striking seen from a distance but up close you get a real sense of her engagement with the surface. Despite the complexity inherent in her meticulous mark-making she is searching for simplicity. Abandoning paint and the myriad decisions necessitated by working oils, it came as a relief to leave areas empty to abandon the necessity of ‘filling everything in’, For her, the spaciousness generated by making drawings like this is “revelatory”.