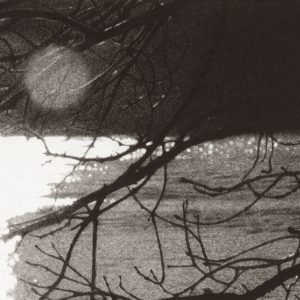 In separate conversations about art and landscape with two different friends, neither of whom knows the other, both encouraged me to seek out charcoal drawings by Sarah Gillespie. When I asked what it was that most appealed to them about her work, they paused amid the tumble of enthusiastic praise for her technical skill, her rigorous attention to detail, and tilted their heads to one side as if casting themselves into the image in their mind’s eye, and said, “The stillness.”

It’s an apt description, but not because Sarah’s work is in any way static; if anything, her drawings seem to buzz with unseen energy, as if they only pause their constant motion when your gaze alights upon them. Rather, the stillness speaks of her keen attention to the landscape and the life that teems within it; instead of capturing a view, it seems more appropriate to describe her as being engaged in a dialogue with it. Her pieces are as much about what she’s receiving as what is witnessed.

“That’s why I love drawing,” she says, as we sit in her sunny Blackawton studio, surrounded by work framed in preparation for her upcoming London exhibition. “You have this ancient thing – a piece of carbon – and a piece of white paper and there’s just mark or no mark. And in that simplicity, there’s space and time for other things to presence themselves to you, and you’re not totally absorbed with yourself and your own expression and your own choices.”

That sense of space in the drawings is perhaps one of the reasons that they are so immersive; you can imagine yourself into them. They are at once contemplative and delicate, and yet loaded with expectation.

“For years I’ve been interested in Buddhism, Chinese mountain poetry and Japanese aesthetics, and there’s a lot in those thought systems about not being afraid of emptiness and absence,” says Sarah. “In Chinese cosmology, rather than being a void, absence is generative, out of which all the ten thousand things – their concept of everything, sentient and non-sentient beings – emerge and continuously fall back. When you spend time in nature, you can’t avoid that: things burst forth and flower and rot and come back, and that’s going on continuously. And it occurred to me that it applies to drawing: those areas where there is an absence of marks are often far more present than the places I’m making marks, and it’s that paradox, the play between the two, that I find endlessly fascinating.”

This confidence to step out of her own way, if you will, has been hard won, not least because she has subjected her own artistic intentions and process to the same level of rigorous scrutiny that she harnesses for her work. Until seven years ago, Sarah was enjoying a successful career as an oil painter. At 17 she’d gone to Paris to study 16th and 17th century methods and materials at the Atelier Neo-Medici, followed by a degree in painting and printmaking (with history of art) at the University of Oxford’s Ruskin School of Drawing and Fine Art. She won awards, was represented by London galleries, and her work was snapped up by Rolls-Royce, Merrill Lynch and Damien Hirst, among others. But a crisis was looming.

“Everything was going well, my work was in Cork Street, it was selling, but I was perennially unhappy,” says Sarah. “I’d finish a piece and couldn’t work out what the problem was. And in 2010, I just hit a wall and couldn’t physically finish a painting, couldn’t push myself through it.”

So, she stepped back from the large landscapes and focussed on a couple of small projects, one of which was a series of quick still life paintings, in the hoping of changing gear or shifting whatever was blocking her.

“And I was standing in a private view of the still life project, which included two or three drawings, and a woman came up and told me how much she liked them, and I heard myself say, ‘Oh, well, I love drawing, but I don’t allow myself to do it because I should be painting.’ And she looked at me, incredulous, and repeated my words back to me, and I thought, ‘Ok, that’s weird. What’s going on there?’”

Sarah listened to her heart and stripped everything back. What remained was the purest form of drawing, the creative activity that had given her most pleasure in childhood and which had sustained her during difficult times. And in the sense that a crisis can also be an opportunity – “I was completely stuck, so actually more open,” says Sarah – she accepted her friend, the artist Alice Leach’s, invitation to go printmaking, specialising in drypoint and mezzotint, techniques that stayed as close to drawing as possible. Immersion in both is what enabled her gradually to interrogate her process, the structures and hierarchies of her thinking.

“With a painting, you’ve got a canvas and you, the artist, covers every inch of it with your decisions, and you make multiple decisions about colour, tone, size of brush marks, type of mark, transparency, opacity, how representational that mark is or how symbolic or gestural… it’s you all over, entirely. And I’ve come to feel that there’s very little space in that process for what’s coming in from the outside. With drawing – and it’s taken me seven years to get it clear in my head – it’s much simpler; you’re not juggling these things that are all about you. And the more you open yourself up to it, the more rich it becomes, and there’s a big difference between that and the pinnacle of the European oil painting tradition, which is very much about the artist.”

And while she is in no way demonising her classical training – “it’s meant I’ve been competent enough to make a living while working out what I wanted to do, which is fantastic” – she’s only now fully understanding what to take from it. “It took me a long time to just loosen myself from that teaching and find my own voice.”

A peek into Sarah’s outdoor sketchbooks brings this home: a collection of short marks, no bigger than a thumbnail, conjure a deer with striking verisimilitude – it leaps from the page. “I’m definitely no longer interested in gesture and the drama of it,” she says. “I’m much more interested in seeing how still I can be and what comes and what happens, and slowly finding my way round it. That deer was playing; it just came out into this stubble field. Overhead, crows were doing barrel rolls, playing in the air. But you have to hang around to witness that.”

Study that deer, or a copse of trees, the powder on a moth’s wings, a swan just visible through the reeds, and your awareness awakens to the knowledge that we are all constructed from the same matter, just vibrating at different frequencies. Sarah’s deep understanding of that, her empathy for her environment, is what makes her such a good conduit. And while she uses photographs to capture tiny details, and for picking up tricks of light that can then be adapted, it’s putting carbon to paper that creates the weight. “Sketching is wonderful for absorption, as much as for the process itself – it internalises the image, adds depth to the drawing. I have a habit of picking up dead birds…” She points to the print of a blackbird. “I found that one in the road, it had just been hit and I didn’t want it to get squashed. I felt the way its head lolled, the one sticky blob of blood, its scratchy little feet… if you just looked at a photo you would know much less about it.”

It’s not surprising, given her precision, that the bookshelf in her studio is stocked mostly with poetry; Yeats, John Clare, and TS Eliot are favourites. “I often come into the studio in the morning and sit and read for ten minutes, as a way of getting into the right frame of mind.” Also there is a collection of essays by art critic John Berger, whose piece ‘Professional Secret’ articulates beautifully the notion of the two-way conversation between artist and subject: ‘To draw is not only to measure and put down, it is also to receive… [That dialogue] is a burrowing in the dark, a burrowing under the apparent. The great images occur when the two tunnels meet and join perfectly. Sometimes when the dialogue is swift, almost instantaneous, it is like something thrown and caught.’

Sarah’s studio is filled with evidence of that dialogue. She says she loves printing because it seems, somehow, more humble. “It sidesteps this slight obsession we have with the unique. The whole thing that’s happened with art as a commodity – the more rare something is, the more value it has – and printmaking goes around that.”

There’s humility, too, in sitting in the landscape, in nature, listening, being open to what’s being offered. Sarah’s work, her worldview, is an antidote to the current climate, in which dialogue is less about a two-way conversation and more about who can shout the loudest. It’s time to pay attention.