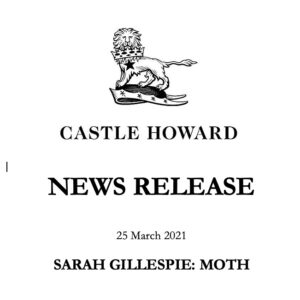 The moths are heading north! All 23 moth mezzotints will be exhibited at the glorious Castle Howard in north Yorkshire throughout the summer.  Entry to the exhibition is free and open to all.  Throughout June I will be ‘Artist in residence’ at Castle Howard and the team there are organising a superb program of talks and events.  There will be family activities during the half term week and mothing nights and dawn walks throughout the month.

For more details of access, covid safety, times and specific events, have  a look at the Castle Howard website here

“If what I have been given is the ability to focus, to pay attention, and if there is even the remotest chance that in attending lies an antidote to our careless destruction, then that’s what I have to do – to focus. It’s not enough but it is necessary.”
Sarah Gillespie, 2019.

British artist, Sarah Gillespie will present Moth at Castle Howard, North Yorkshire (29 May – 5 September 2021), an ongoing project that, for the past two years, has seen Gillespie research, draw and engrave common English moths by way of highlighting their dramatic and devastating decline and celebrating their overwhelming importance.

The exhibition will feature all 22 of the resulting mezzotints as well as a new work, Gillespie’s largest mezzotint to date. Measuring a monumental 2’ x 3’, it features a Peppered Moth, and marks a stark change to a process that is normally measured in inches and not feet. Gillespie will also live onsite in the grounds of Castle Howard itself as part of a month-long artist’s residency where she will study its moth population and produce new works in response, including one created publicly during visiting hours.

Frequently considered a pest, moths are deeply unloved by most humans and grossly misunderstood and overlooked in favour of the more colourful daylight dwelling butterflies. However, moths are more numerous and more varied. They are a major part of our biodiversity and hold vital roles in the wildlife ecosystem as pollinators, recyclers, and food for bats and beloved songbirds. Recently and highly topically, US based pharmaceutical company  Novavax has used moth cells to create its coronavirus vaccine. Moths really do matter.  From the silk road to ultra new vaccines life is truly tied up with moths.

Since 1914 it is believed that around 62 species of moths have become extinct in Britain alone. In just the last 35 years the overall number of moths across Britain has fallen by around one third owing to habitat loss, intensive farming, commercial forestry and light pollution. Species such as the well-known Garden Tiger, have fallen by 80% or more. Gilliespie’s work draws attention to this catastrophic collapse while tenderly celebrating their unseen nocturnal lives, exquisite diversity, and the poetry of their common English names.  Her use of mezzotint – a labour intensive tonal engraving technique used widely between the 17th and early 19th century – is key in rendering the nocturnal quality of both the subject matter and the works themselves. It is only through repeated careful and gradual scraping and polishing of the copper mezzotint plate that these soft gradations of tone and rich and velvety blacks are revealed.  At times presenting themselves in all their astounding detail and at others disappearing altogether, Gillespie’s moths hum quietly, a gentle reminder of what may disappear permanently.

The creation of the Peppered Moth mezzotint, Gillespie’s largest to date, is of particular relevance to Castle Howard, whose landscaped gardens provide the ideal location for its own large and varied moth population. During the Industrial Revolution in the 19th century, the species experienced a rapid evolutionary mutation, causing it to turn black. The Peppered Moths’ unusual colour change saw it darken in response to its habitat that became increasingly polluted and soot covered, allowing it to camouflage and escape predators. It was in industrial Yorkshire cities, close to Castle Howard, that the phenomenon was observed in 1848, a full 10 years prior to Charles Darwin’s world recognised theories on natural selection. The introduction of clean air laws in the 1960s saw the previous speckled variety return. Creating a mezzotint on this large scale, measuring 2’ x 3’, has been a significant feat for Gillespie and taken a number of months to perfect. The Peppered Moth will become a focal point for the exhibition, not just for its sheer size but to reflect the tenacity of these creatures and the geographical ties to Castle Howard behind this particular species’ fascinating evolutionary story.

Nicholas and Victoria Howard, owners of Castle Howard say of the exhibition, “We were first introduced to the work of Sarah Gillespie about eight years ago and quickly realised that she was one of the greatest landscape and nature artists of her generation. We are therefore delighted to be hosting her current exhibition, Moth, at Castle Howard and contributing, albeit in a small way, to raising awareness of both the beauty and ecological importance of these magical creatures.”

Throughout the exhibition there will be numerous bookable events taking place at Castle Howard in collaboration with Gillespie and the Yorkshire Wildlife Trust, highlighting the importance of moths in the natural world. As well as talks, the public will be able to join breakfast and dusk walks, viewing these elusive creatures in their natural habitat, as well as a weekly online live streamed event that will see Gilespie release moths caught humanely overnight within Castle Howard’s grounds. Gillespie will also demonstrate the work that goes into creating and printing her intricate mezzotints as she creates a new piece inspired by her month-long residency at Castle Howard, the process of which can be viewed in person and real time by visitors. All event and booking information can be found at www.castlehoward.co.uk

Sarah Gillespie: Moth will be accompanied by a revised second edition of the previously sold out artist’s book of the series. The new hardback edition features three additional moth prints, an introduction by multi-award-winning author and naturalist Mark Cocker, alongside a specially gifted poem by Alice Oswald. It is available to buy, priced at £45.00, from Castle Howard’s Gift Shop and directly from Gillespie’s website – https://www.sarahgillespie.co.uk/editions/moth/

About Sarah Gillespie
Sarah Gillespie is settled with her family in the Southwest region of Devon. She is an artist of exceptional integrity and skill in observing and representing the natural world – primarily focused on the countryside of England that surrounds her daily.

Gillespie was born in Surrey and studied at the Atelier Neo Medici in Paris and the Ruskin School of Fine Art at Oxford University. She was awarded the Egerton Coghill Prize for landscape painting, and the prestigious international Elizabeth Greenshield Award for figurative painting in her early career. Most recently she is known for the Mezzotint printmaking technique that she has adopted to capture the half-tones and gradients of the limited palette of ‘black and white and subtle shades of brown and grey’ she uses to create her work.

A member of the RWA (Royal West of England Academy), in 2019 Gillespie’s work was recognised at the International Mezzotint Festival in Yekaterinburg, Russia, where she was awarded the prize for ‘Adhering to the Traditions and Skills of Graphical Work’.
www.sarahgillespie.co.uk

Castle Howard, situated 15 miles North of York, is one of England’s most magnificent stately homes. Designed by Sir John Vanbrugh and Nicholas Hawksmoor, this Baroque masterpiece is surrounded by an Estate of 9000 acres in the Howardian Hills, a designated Area of Outstanding Natural Beauty. Home to the Carlisle branch of the Howard family since it was first built over 300 years ago, the family still act as custodians of both its built and natural heritage.

Successive generations have welcomed visitors to the house and grounds and it was first opened extensively to the public in 1952. Visitors can expect dramatic interiors and world renowned art and antiquity collections inside the house, while outside the grounds offer extensive woodland walks, temples, gardens, lakes, and fountains.
www.castlehoward.co.uk