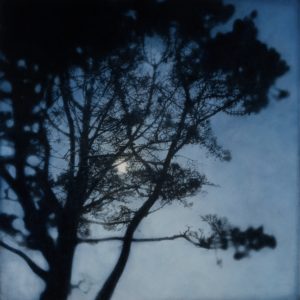 When I went to see Sarah Gillespie recently at her oak-framed Devon studio, I suggested to her that there was a serenity, almost a purity, in her art that reminded me of a swan sailing upon water. I think the image is apt partly because swans have been a theme that she has herself explored several times in the past. But it’s also because with swans there is a  contrast between appearances and reality.

Above the water it’s all calm, pristine beauty; beneath are those thick, black, scaled legs rowing in muscular coordination with the massive, flat, parchment feet. In exactly the same way, Gillespie’s art is full of precise choices, care and immense efforts, but its quietness allows us sometimes to overlook the wonderfully dynamic processes at work below the surface.

Nowhere is it more evident than in her choice of places or moments to capture in her paintings. They seem so fleeting in content, so incidental, almost minimal, that it would be easy for us to fail to notice these scenes in real life. Yet Gillespie has recovered their significance for us all.

Here in the oil painting entitled Collaford Oak are the shadow outlines of summer trees with just their silhouetted branches against the grey cloud. Gillespie’s chiaroscuro balances an immense and mysterious shadow with subtle light.

In Ebbtide we see only the tree-lined edge of the River Dart whose surface is minutely stirred by the breeze. In both of these immensely atmospheric paintings an avenue of sunlight burnishes the ripples and lights the Dart’s curving passage, inviting us to imagine what lies around the bend.

Then there’s that fragment of an exotic conifer in Monterey Pine. We only see perhaps a left third of its canopy, requiring us to invoke for ourselves the tree’s great umbrella’s spread of emerald. Beyond its dome is an ambiguous but powerful light – dawn or dusk perhaps? – that fades towards its lower horizon.

Night in the Tiltyard inscribes a hazy moon but its corolla is barely visible through the sparse canopy of the tree. Yet the power of that lunar glow turns the heavens blue and calls to our mind’s eye the whole tiltyard bathed in its light, as well as its strange history.

In a painting called Thorn the rising mass of the hedge bank – like those flanking the lanes all around Gillespie’s home – seems so dense and impregnable we are almost drowned in its vast shadow. I love the way that even the sunlight seems itself caught momentarily in the great palisade of spikes. Yet glance away and one senses that what seems so substantial a vision will all have disassembled once we look back.

What is common to our experience of these paintings is a profound sense that we see only part of the whole. Somehow the artist has implied a much larger landscape to which each tableau organically belongs. We can feel those wider places beyond the confines of her canvas. To explain this concern for ‘scenes without edges’ Gillespie recalls lines that are important to her from William Blake: ‘Nature has no outline./ But Imagination has’.

You realise that this artist is attempting to take us as close to nature as an image possibly can. It is an edgeless place and this lack of borders operates in two ways: we ourselves feel inserted directly into the mood and life of her scenes; each scene, in turn, is an integral detail of a wider world.

A concern for connection to the rest of life is at the heart of Gillespie’s ethical and aesthetic practice. Each image strives to convey a moment when the artist loses any sense of separateness from her surroundings. Hours of looking induce a state of oneness and while she dismisses any mystical connotations to the process, she is crystal clear about its effects and its authenticity. ‘I know it instantly.’ she says. ‘The moment it hits. It’s like a tuning fork’.

Every one of her images is a visual, material translation of that private engagement with the more-than-human parts of life. And let’s not pretend for a moment that her capacity to tap into this deep reservoir of empathy is something only for the devotee, like a Zen Buddhist. We all know empirically that life is on one great big family tree. We so often date our origins back a mere 4 million years to when we separated from the great apes, but truthfully our heritage stretches back over 4 billion years to an eon in the Earth’s deep past called the Archaean. We are truly the children of unicellular life. Even more abundantly evident is that we could not exist without the planetary effects of bacteria that don’t even possess a nucleus. These are proven scientific facts. This is one world. We are one living community. Sarah Gillespie’s art speaks directly of it.

If her work has a political message it is about the need for us all to feel and care more deeply for the living world. We are now so assailed with evidence of humanity’s ever-more destructive impacts upon other life forms – and not just glaciers and icecaps, whales and turtles, fishes and forests, but every one of our fellow animals even unto insects –  that we can see the burning relevance of Gillespie’s central concerns.

Her silverpoint drawings and mezzotints of moths make the case powerfully. They portray some of our country’s most beautiful and yet completely overlooked animals, partly because moths are active when we are not. These insects are abroad while we sleep, and, although they are all around us, they are largely unknown. Yet Gillespie has intercepted their mysterious journeys, which take them into almost every British garden, whether in the countryside or the city, by use of special kind of trap. She both evokes their living beauty but reminds us of their plight. A recent report indicated that large moths in southern England have declined by 40 per cent since the 1960s.

This is dark and troubling stuff and there are indeed shadows in Gillespie’s art. Yet Thomas Hardy once wrote that just as an individual follows particular threads in the fabric of a carpet according to their own character, so each artist must follow the organic tendencies of his or her genius. To me it seems obvious that there is a strain of melancholy in Gillespie’s.

But I see it in a very particular way. In the Brazilian musical form known as Bossa Nova (New Beat), there is a term saudade which has no direct English translation. Essentially it refers to a bittersweetness of sensibility: that one can be sad and yet, being alive and, thus, still capable of deep feeling, one experiences also a simultaneous, consolatory joy. ‘Glad to be unhappy’ is how Paul Winter, the great pioneer of world music, explained it to me recently.

Sarah Gillespie’s art is full of saudade. She is so alive to the entropy at work in life’s processes, but also to its exhilarating vitality. Her paintings may contain shadow, but they are also full of dazzling light. They may seem quiet but they are full of a tender passion for the world that they so lovingly recreate. This, finally brings me back to my swan and its value as a metaphor for the work of this immensely modest, immensely gifted artist.

Anyone who lives with swans knows that they can float serenely upon the surface. Yet they are also among the largest flighted birds on our planet. One moment they are quiet, and in the next they take off. With those extraordinary black feet and that immense white span they clatter upstream, rhythmically, simultaneously feet and feathers, 20-3o beats upon the surface of the water, until, finally, there is that moment and they are no longer bound to the Earth. They sail into the sky – passionately aloft on wings that appear to be made of pure light.